Rivers are Losing Flow to Aquifers 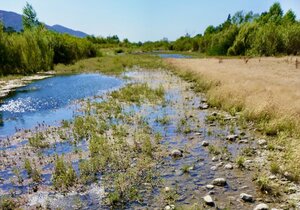 Most anglers recognize that the rivers they fish are connected to the surrounding groundwater. As stream flows decrease and water temperatures rise, groundwater continues to flow into the stream helping to maintain stream flows and cool the surface waters. But as Harrison Tasoff reports in PHYS.ORG recent research reveals the extent to which rivers across the country are losing flow to the surrounding aquifer.

Water is an ephemeral thing. It can emerge from an isolated spring, as if by magic, to birth a babbling brook. It can also course through a mighty river, seeping into the soil until all that remains downstream is a shady arroyo, the nearby trees offering the only hint of where the water has gone.

The interplay between surface water and groundwater is often overlooked by those who use this vital resource due to the difficulty of studying it. Assistant professors Scott Jasechko and Debra Perrone, of UC Santa Barbara, and their colleagues leveraged their enormous database of groundwater measurements to investigate the interaction between these related resources. Their results, published in Nature, indicate that many more rivers across the United States may be leaking water into the ground than previously realized.

In many places surface waters and groundwaters connect, while in others they’re separated by impermeable rock layers. It depends on the underlying geology. But where they do intermingle, water can transition between flowing above and below ground.

“Gaining rivers” receive water from the surrounding groundwater, while “losing rivers” seep into the underlying aquifer. Scientists didn’t have a good understanding of the prevalence of each of these conditions on a continental scale. Simply put, no one had previously stitched together so many measurements of groundwater, explained Jasechko, the study’s co-lead author.

“Losing rivers aren’t some hypothetical scenario,” Jasechko stated. “They’re here and now.” They are in part the result of the past century of water use and misuse.

“If we have a better understanding of how widespread this phenomenon is, then we can influence future policy in positive ways,” added Perrone. Because society is past the point where it can talk about prevention; we’re now talking about response.