Spining or Finding the Guide Side of a rod blank

This simple process has caused much confusion and debate within the rod building community. Understanding why there is such a thing in the first place may help to eliminate a lot of the confusion. The act of ‘spining’ is finding the differences in the wall thickness of the blank after the flat graphite (carbon fiber) cloth is wrapped around a tapered steel mandrel and then oven cured. The mandrel has the rod designer’s line and length taper specifications ground to within thousands of an inch. The designer dictates the amount of graphite cloth (combined with a resin scrim) that the finished rod blank will have, how much overlap the cloth will have. The graphite materiel is cut into a tapered pattern, which will be wider at the butt end and narrower at the tip end. Because of these ‘ends’, each blank will have end spots, which will feel like ‘high points’. These high points, which typically run the entire length of the blank, are what we call a spine or spines. Just like the spine in your body, it is a stiff area in your back but different in blanks in that you may encounter several spines depending on how the graphite cloth is applied, or ‘laid-up’ on the mandrel. When the graphite is wrapped with heat shrink tape and oven cured, a ‘natural curve’ will appear along the rod shaft. This natural curve will be apparent when you sight along the axis of your blank and it has a definitive curve to it, if not, you’re lucky and you accidentally got a straight one. Also the curve will be more visible when you rotate the blank shaft when sighting down the length of it. This natural curve is also called the weak side, where the thickness of the graphite materiel is less than the other side, or the strong side. Although I have to admit that the rod companies that ‘roll’ their own have over the years produced straighter blanks without much curving.

So, we have a weak side and a strong side as determined by the amount of graphite material wrapped around the steel mandrel. You can check this weak side by holding the blank at a 45 degree angle with your one hand near the tip and then by pressing down and rotating at the same time with fingers of your other hand. The resistances you feel on both sides are the high points or spines. On tip sections you can also stand the tip upright and press down on the tip to make the section flex. The concave side is the guide side and obviously this only works mostly for tip sections; it’s hard to push down and flex the butt section of a 12wt! 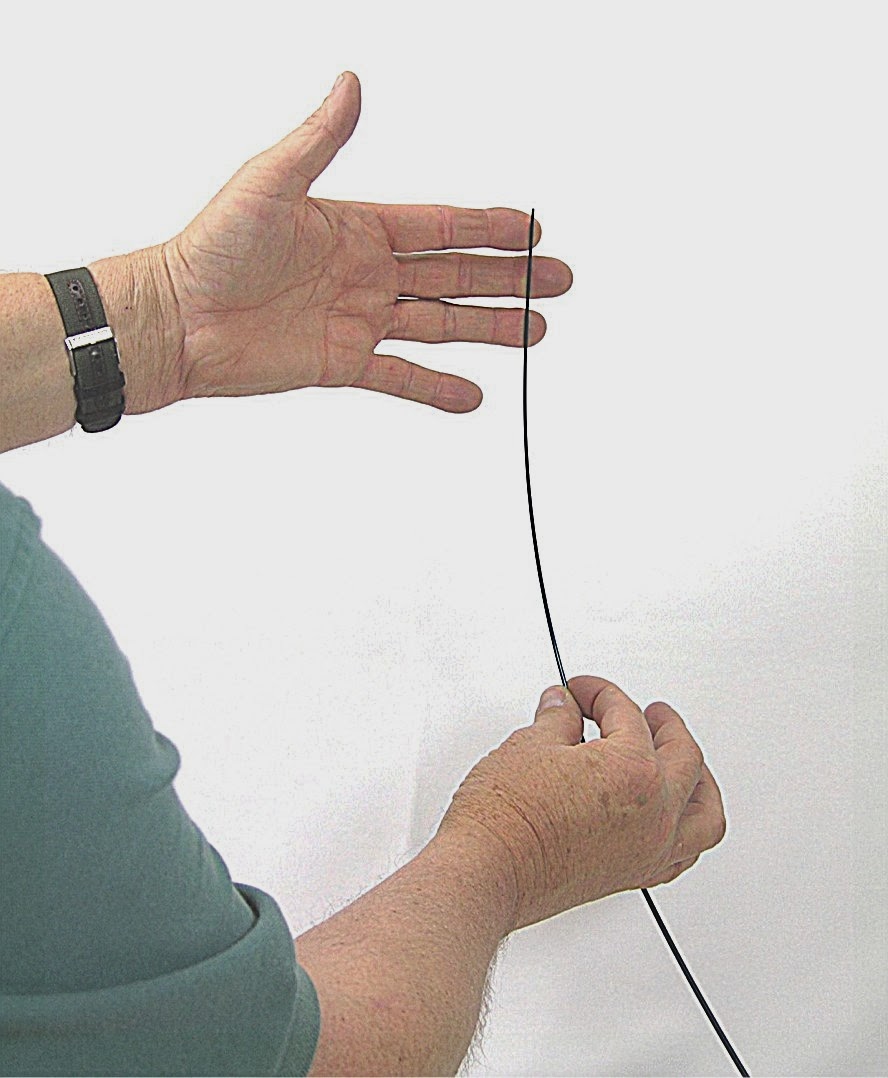 Remember the opposite side of the weak side is the thicker part of the blank and will result in more power in lifting and fighting big fish as the graphite resists compression as a result of more materiel. By putting your guides on the natural curve side, you will prevent the rod from twisting in you hand. If the guides were put off to the side this would cause the rod to twist during the cast resulting in inaccuracy, this is why guides are typically put 90 degrees to the spine as one manufacturer states but this will result in the same thing as putting your guides on the weak side.

Maintaining casting accuracy in trout fishing is more important than lifting power as in big game saltwater fishing. By properly placing your guides; your rod will track properly through the casting plane. Whether you decide to place your guides on the ‘weak’ side or the ‘strong’ side is a matter of individual decision. Being aware of a spine or spines and what they do will give you a better understanding of rod design and will help you create a finely tuned casting instrument.

Whether to spine or not to spine will continue to be a question until the end of time. The bottom line is that you are building your rod and you need to do what you think is best for you.