Left the Denali National Park area at 8:00AM and headed for Talkeetna. Arrived about 10:30 just in time to get ready for the train departure at 11:30. Getting ready meant that we got our rain gear and fishing gear squared away. Rained most of the trip down and was still raining when we left Talkeetna for the Twin Bridges of the Hurricane Turn Train. Boarding passes were in the Hurricane Train Adventure coaches; where the local people get on and get off to their homes along the railroad. It was fascinating to see families get on in Talkeetna to get off somewhere along the way and their cargo dropped off with them while other people boarded on the southbound train to Talkeetna by waving the train down. They get on and off at the mile markers as there are no towns or villages along the way. We got off at mile 269; which is calculated from Anchorage.

Anyway, back to our trip today. Our tickets allowed us to go to the Twin Bridges area which as the name indicates there were two bridges over the Indian River close to one another. What a beautiful piece of water with trout and salmon swimming about it crystal clear water. Walked down to the river and had a rainbow on quickly but lost it. Lee had a nice fish on for a second but she decided she didn’t want to hurt the fish so she let it go right away. Rain never stopped the whole time we were there. We got dropped off at 1:15 from the northbound train and picked up the southbound train at 3:45. A short fishing day but the train ran a bit late and I didn’t mind as I was hooking up a few rainbows and a couple of Chum salmon. 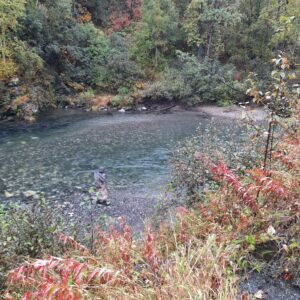 The salmon were quite challenging on my 6wt as the first one broke me off when I beached him and the second salmon was also beached and the fly simply pulled out. Both fish were in the 10-12 lb. class whereas the rainbows were around the 16 inch class. The rain never ceased and then all of a sudden the rainbows starting rising to dries. I think it might have been a caddis as the fish we leaving the water to take the dries. Couldn’t see very well in the rain but I think I saw a bug that looked like a rusty colored fall caddis. The takes were fierce and splashy so that indicates caddis rises. In this cool, rainy weather I decided that taking a few dry flies was unnessary, hmmmm. A lesson to be learned here; always take both wets and dries!

The water was running down my casting arm into my shirt and just about everything else got a good soaking. Heard the train whistle and had to scramble up the steep bank to catch the train. If we missed the train, it’s a 12 mile hike out through bear country. Bear spray was on my belt and thank goodness never had to use it. Lee manned the camera and she did a great job considering the conditions.