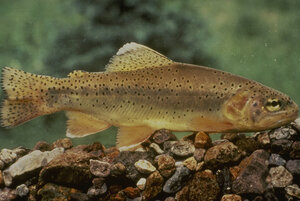 The Apache trout (Oncorhynchus apache) is one of only two trout native to Arizona, the other being the Gila trout (Oncorhynchus gilae) Gila trout recovery. It is officially designated as Arizona’s state fish, and was historically found only in the headwaters of the White, Black and Little Colorado Rivers above 5,900-feet elevation in east-central Arizona.

Apache trout have an olive-yellow body, with a yellow or golden belly. Moderate-sized black spots are spaced evenly across the body, head and fins. Fins are tipped with a white or orange color. Two black spots are located horizontally on the eye fore and aft of the pupil, creating a black band through the eye. They can grow to over 20 inches in length and weight up to 5 pounds in hatcheries and lakes; however, most wild Apache trout are less than 9 inches in length, a reflection of the small stream habitats where they live.

Once nearing extinction, the Apache trout is now returning to its place in the legacy of Arizona’s unique, native fish resources. Apache trout have been restored to much of their historic range in the White Mountains after decades of cooperative protection and recovery efforts. Because the species has recovered sufficiently, anglers can now fish for them in designated state waters or on the Fort Apache Indian Reservation. This native trout is an important part of Arizona’s natural heritage, and is a recreational and economic asset to the state. The Apache trout is found nowhere else in the world.